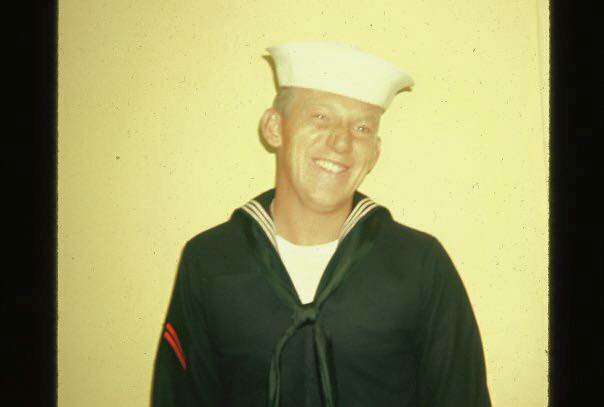 In October of 2017, I was in an incredible amount of pain. I’d had surgery on my left hip to remove an infection around the muscle. I was confined to the couch and couldn’t find a comfortable position no matter how I tried. My right arm was encumbered with an IV where I injected myself twice daily with antibiotics to ensure the infection was indeed gone and would not return. My spirits were low at best and I was feeling pretty sorry for myself. My dad came by to visit and I welcomed the distraction. We sat together in the living room sipping coffee. We made small talk about the weather, how I was feeling and what he had been up to. Then in one of those rare and magical moments that only occurred without warning, my dad took off on an adventure through his memories and shared this story with me.

Dad was a poor kid. Not the regular kind of poor, but the kind where no one eats for days at a time, poor. The kind of poor where your mom cuts holes in the tips of your shoes to let your toes through so you can wear your shoes longer. The navy was the first place Dad ever received three meals a day and unlike most new recruits, he gained weight instead of losing it. Even sitll, the navy paid very little and what my dad made was mostly sent home to his mother.

One day his commanding officer told him he’d received a letter stating dad was to appear in the Santa Ana court to testify to an accident he had witnessed over a year earlier. Dad panicked when the commanding officer told him he had to get from where he was docked in San Diego to Santa Ana. How would he get there with no money? Fortunately the commander gave my dad $1.50 for the cab ride but dad was terribly frightened as he had never been to court before.

When he pushed open the heavy court room doors and walked down the aisle, the entire room grew quiet. The Judge asked my dad who he was.

“M-m-my name is John E. Boyer. I’m a- a sssssailor in the US Navy aboard the USS Ba-ba-bauer,” he managed to spit out. Dad was cursed with a stutter that grew worse when he was nervous.

“You are a witness for the police officer?” bellowed the Judge from the pulpit. Dad stared back. His freckled face blushed under the stern gaze of the Judge and he removed his hat from his head and rung it nervously in his hands.

“You are not a witness for the officer?” clarified the Judge. My father shook his head.

“Then pray-tell, Mr. Boyer, why are you here, son?” The Judge leaned over the pulpit so close that my father smelled the tobacco on his breath.

“Uh, I uh,” Dad stuttered, “I s-s-saw that m-m-man hit the wo-woman,” he pointed at the police officer. “Th-then he-he turned on his car lights.” The officer slid guiltily down in his seat. The Judge swung his head to the right to stare at the cringing officer.

“Is this true? Did you hit this woman first and then turn on your lights?” questioned the Judge as the officer burned a hole in the floor with his stare. The woman whom had been hit and severely injured in the accident, suddenly broke into tears.

Then the Judge did something likely no one expected. He ordered that the lot of them-the officer, my father, the woman and himself would all go to the site the following day so that he could see for himself where my father had stood and witnessed the accident.

“I’ll expect you back in the morning, Mr. Boyer,” said the Judge.

“Speak boy, what is it?” the Judge was growing weary.

“C-c-can I sleep in jail, s-s-sir?” Dad’s face flushed from his cheeks to the tips of his ears. Clearly taken back and confused, the Judge adjusted his robe and for the first time smiled.

“Son, why would you want to sleep in jail?” he asked.

“I have n-n-no money, s-s-sir,” Dad’s eyes watered with humiliated tears that he refused to let spill.

“Young man,” at this the judge grinned, “not only do you not have to spend the night in jail, but I will make sure you sleep in a hotel with all the food you can eat. Then you will receive five dollars. Will that suffice Mr. Boyer?” Dad’s head snapped to attention. He’d never slept in a hotel and five dollars was more than he’d ever held in his hands. Ever.

To say that he lived-it-up that night, would be an understatement. He showered then lounged in the complimentary robe while the hotel staff pressed his navy dress-blues. He ate as much food as his belly could hold and then wrapped the rest up in a napkin for the next day, in the event he would not be fed again in morning.

By the time the blazing Santa Ana sun streamed through the window of the hotel, John E. Boyer was up, clothed in his freshly ironed navy dress blue’s and sipping a cup of coffee the hotel staff had brought him. At the allotted time, a cab pulled up in front of the hotel and Dad brushed the crumbs from his pants. Along with the coffee, he’d been served a full breakfast of biscuits and gravy, his absolute favorite meal.

Once the officer, Judge, woman and Dad had all gathered at the court house, they piled into cabs and drove to the scene of the year old crime.

At this point, my dad rubs his face and takes a swig of his coffee. He rocks back and forth in the rocker. I’m sitting with my legs propped up on the couch, anxious to hear the rest of the story.

“I’ll tell you what,” he says, “I hadn’t been on that sidewalk, in that spot for over a year, but I remembered it like it was yesterday.” He takes another sip of his coffee. My leg is aching, but I ignore it as I wait to hear what happened next.

“Son,” asked the Judge, “are you certain this is where you stood?” Dad nodded his head. The police officer swallowed and looked at his feet. It was clear to the Judge, and obviously everyone else too, that Dad had a clear view of the accident and there was absolutely no hesitation that would indicate he was lying. Dad’s story and the woman’s story were the same. The woman teared up again, threw her arms around my father and pressed an envelope into his hand.

The ride back to the courthouse was somber. My father remembers that once everyone was seated in the court room again, the Judge laid into the officer.

“You are a disgrace to the Santa Ana police force and you no longer have a job. I will see to it,” he slammed his fist on the podium.

Dad rode back to his base via a police escort, to protect him from the other police officers who wanted to beat him up for turning in their fellow officer. On the way he fished for the envelope he’d shoved into his pants pocket. He opened it just enough to see what was inside. He counted forty-five dollars. He was rich!

“And you know,” says my dad, looking in my eyes, “I made that money last four months.” He smiles. For a moment, I catch a glimpse of that skinny nineteen-year-old boy from Quincy, Illinois with the embarrassing stutter. He’s dressed in his navy uniform and clasping a fortune in his hands. He’s come a long way and built a beautiful life for himself, my mom and my sister and me. He’s a survivor, that eleventh child in a line-up of twelve, and I’m proud to have him as my father.