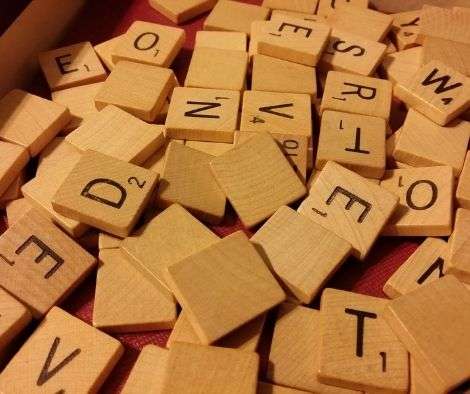 “My name is Esther,” her blue eyes focus on me, then past me. Ringlets of white hair poke out and over her tiara. Her tights sag elephant style about her knees and one shoe is gone.  Under a canopy of flowers, a turquoise frosted, half-eaten cupcake lay in her lap. She thrusts the bouquet of wildflowers into my hands and adjusts a ribbon stuck to the front of her dress.

“I’m 99 and today is my birthday.” She smiles exposing stained blue teeth. A frown clouds her face and bits of dried icing flakes from the corners of her mouth.

“Well maybe it’s my birthday,” she feels for the tiara sitting eschew on her head, “or maybe I just like to wear a crown.”

A ruby ribbon on her breast reads, “Scrabble Champion.” Esther throws her hands in the air, “Me, too! I’m scrabble champion, too!”

I attempt to explain that I’m merely reading her ribbon aloud, but she’s launched into spelling words, informing me how much each is worth in Scrabble points.  Again, I wonder aloud, how it is that she sits alone in the hallway?

“Oh, I’ve just been here.” She remarks, as if this were explanation enough. I look up the hallway and then down, but where are the nurses?

“Are those for me?” Esther reaches for the flowers she forced on me earlier. I nod, hand them back to her. She raises them to her nose and inhales deeply, “Just lovely!” I nod in agreement.

“Esther!” A woman in a mid-length skirt, white nurses’ shoes and a scowl on her face races towards us and plants herself square in front of Esther’s chair.  “Where in the world do you think you are going?” The nurse whips Esther’s wheelchair around, the cupcake topples to the floor.

“This is my daughter,” Esther says.

The nurse glances over her shoulder and I in turn, look over my shoulder. Finding no one behind me, I look back at the nurse and shake my head, ready to explain. The nurse however will have none of it.

“Get in here, then,” she snaps at me, “I can’t have Esther wandering the hallways.” She returns her attention to Esther.

“And where has your shoe gone?” The nurse shakes her head, clicks her tongue, pushes Esther towards the dining room.

Esther cranes her neck around to look at me, “Come along dear and meet the others.”

From the very first pages, Lorinda Boyer’s pile of confessions
moved me. Lorinda is a master with a pen. She incomparably
describes what it feels like to be a Christian woman who must
comply with fulfilling the role of being a perfect, dutiful wife and
mother at any cost. No saints exist in the pages of this
exceptionally written memoir, yet what stands out is the way
Lorinda writes about how much her beliefs, confusion, and other
people’s actions or lack of them affected her behavior. Overall,
Straight Enough by Lorinda Boyer is a triumph of embracing one’s
identity, redefining love, expressing one true self, and freeing
oneself from feeling unworthy of love. It portrays ​a flawed, loving
woman who repetitively struggles with excruciating guilt and
thoughts that say she deserves to be punished by God.

by Emma Megan for Readers’ Favorite