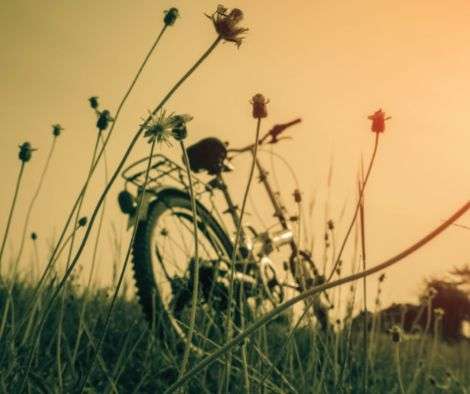 I first met my new bike in 2009. I was driving by a local bike store when her silver paint glitzing in the sun, caught my eye. I pulled in to have a closer look.

It wasn’t that I didn’t fully appreciate my blue mountain bike. We’d been through a triathlon or two, plenty of training rides and we’d grown quite fond of one another. But even with the slick-ish road bike tires I’d traded her bulky tires out with, she was a mountain bike. What she really wanted was dirt trails, roots sticking up and jumping. What I gave her paled in comparison; soft road riding and plenty of it.

So, when I spotted the snazzy commuter bike with her much lighter frame and thinner tires, I couldn’t help but feel a connection. I extracted her from the other bikes, straddled the seat and took her for a whirl around the parking lot. What a fit! We were meant to be together.

We spent a lot of time together that first year. We did the Padden, Samish and Clear Lake triathlons, Padden duathlon and our longest distance, the 100+ mile MS ride. Our connection was solid.  We spent almost as much time together the next year, she continued to perform well, I managed to stay upright, happiness.

Then, in 2011, things came to a screeching halt. I was forced to move her four times in less than a year. Each time to a different garage where she hung, unused and largely unnoticed. Our communication broke down and our relationship began to suffer.

This year, 2012, we finally got reacquainted with one another. We did a couple bike rides around town, the Padden triathlon, and she even got a new coffee cup bell to wear on her handlebars. I felt confident we were patching things up. And then came the STP (Seattle to Portland bike ride) a two hundred plus (no one seems firm on the exact distance of the plus) long ride.

The ride began well enough. We moved along the route with minimal effort, merrily enjoying the scenery and the company of others. But as time drug on, the miles piled up, and I sensed we were both growing disagreeable. This was our longest ride ever. I was achy, she was creaky… It was tough.

As we rolled into the Chehalis stop, the hundred-mile mark, we breathed a collective sigh of relief. We spent a short time lounging with fellow cyclists then rejuvenated, pedaled the final twenty-eight miles to our destination for the night.

The second day of the STP was when my bikes’ authentic feelings began to show. At one point she pitched me off and I landed hard on the gravel. Luckily, I came away with minor scrapes and bruises, but it was a sure sign she was growing irritable of the whole enterprise. Sunday evening, 204 miles later, (give or take) we wheeled across the finish line.

Monday afternoon we loaded the bikes up onto the back of the car. I imagined my bike must be as excited as I was to be going home. We’d traveled quite a distance; we were nearly home, the final stretch when Sandy suddenly yelled,

“Holy shit! Lorinda’s bike just flew off the back of the car!”

We whipped around to look out the windows and sure enough, she had. Sandy took the next exit and circled back. With our noses pressed to the glass, we scanned the sides of the freeway, strained to see the berm in the middle, but she was gone.

I don’t mean to speculate, but I believe she jumped. I’d pushed her too far and the fear that I may do it again was too much. I was sorry to see her go. We’d had some rollicking times together and I’d miss her. But I’d also learned a valuable lesson, any bike of mine had to be tough. Life is unpredictable, and you just never know when you may be pushed to go two hundred plus miles whether you feel like it or not-and you just have to be ready.

“From the very first pages, Lorinda Boyer’s pile of confessions moved me. Lorinda is a master with a pen. She incomparably describes what it feels like to be a Christian woman who must comply with fulfilling the role of being a perfect, dutiful wife and mother at any cost. No saints exist in the pages of this exceptionally written memoir, yet what stands out is the way Lorinda writes about how much her beliefs, confusion, and other people’s actions or lack of them affected her behavior. Overall, Straight Enough by Lorinda Boyer is a triumph of embracing one’s identity, redefining love, expressing one true self, and freeing oneself from feeling unworthy of love. It portrays ​a flawed, loving woman who repetitively struggles with excruciating guilt and thoughts that say she deserves to be punished by God.”